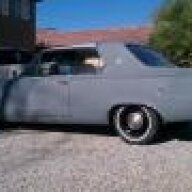 Personally I fight with myself. I get frustrated and want to sell this car. Then at the last minute I dont. Oct 22, 2019

Welcome to our site! Please take a moment and Register today!