Dan the man said:
Nice car, to bad we're not allowed to respond to sale ads.
Click to expand...

Dan the man said:
Nice car, to bad we're not allowed to respond to sale ads.
Click to expand...

You can here just not there.

Because they get deleted.
D

toolmanmike said:
You can here just not there.

no,that's not true. It's suppose to be put in the for sale section, but mine get deleted no matter where I post them

toolmanmike said:
You can here just not there.

I've used the MP "Radical Resto" 340 cam in a 318. Mean Lil Mother, had that motor in a Truck and a Ramcharger

I ran the MP .474 "street Hemi" grind in a 68 Coronet 383 Magnum 4 spd. Tall Wieand single plane, headers, Mp elec ign, windage tray, fully grooved Mains and a high volume oil pump, headers into Flowmaster. That hardtop was a bad *** ride in the 90s I never should have got rid of that mother I kind of got screwed out of it technically
O

The Street Hemi grind cam is 284 duration advertised 471 lift on both intake and exhaust. Kim

oldkimmer said:
The Street Hemi grind cam is 284 duration advertised 471 lift on both intake and exhaust. Kim
Click to expand... 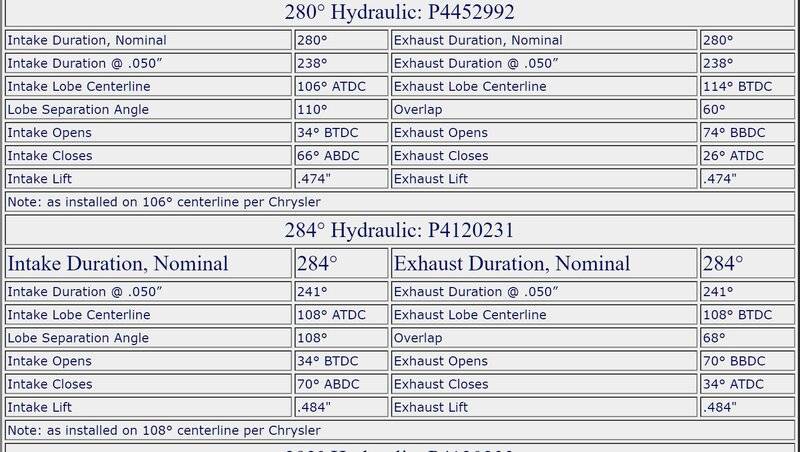 The OG Street Hemi B/RB cam had 284* duration and .471/.474" lift (split pattern) and 108*LSA.
Mopar Performance reeingneered the Direct Connection original to: 280* duration with .474" lift (single pattern) with a 110*LSA in the late '80s if I remember correctly. Comp Cams' Magnum and Isky Mega had upped the ante with their more modern profiles, so the duration advertised went DOWN to 280 from 284 and the .050" duration went UP from 228 to 230, and they widened the lobe separation to 110 from 108 to clean uo the idle some and broaden the powerband some. In big blocks, the late grind impressed me with it's performance but the magic "sound" was gone. Never tried the original SB Street Hemi, but it was ground on a 112, so it's LSA moved the other way, and the intake lobe was common with the exhaust. A friend used one in a low compression (reman late 70s shortblock) 360 with J-heads and Crane 1.6 roller rockers with nitrous in a '72 Duster. Ran better than it should, until they cooked the bearings and it lost oil pressure. Either way, I prefer the smaller (two steps) 260/268*-.430/.450" Purple Shaft in a 318 for performance and a 360 for towing.
Last edited: Nov 13, 2022
You must log in or register to reply here.
Share:
Reddit Pinterest Tumblr WhatsApp Email Share Link