Show your slant 6 a body!

First time out of the garage on its own 4 tires in over a year. Spring is coming!

My latest Dart still has the original plates. I found the build sheet and part of the carpet color sheet on the floorboards under the carpet instead of on the back seat.

Sold this ,74 with AC a couple years ago to young guy who drove it 40 miles each way to work. Only person I know that tore up S6. Waiting to help him rebuild it.

Just got it home today! 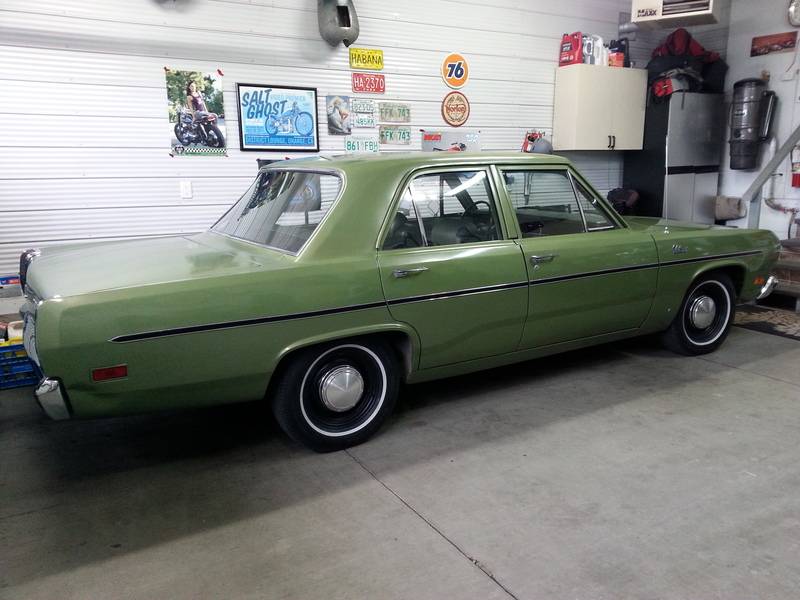 Dad an mines 71. 225 obviously. Auto. Pretty clean car. Small surface rust on drivers side rocker by back door about 1/4 Of a dime. Needs a front seat cover and weather stripping which I just ordered. Other than that it's solid. The drip moulding filler (don't know what you call it) is cracked so I'd like to have the car worked and painted. But I'm not a body guy so I need to save some coin. So far anytime I wash it I wd40 on the small rust spot and in those cracks to just keep water out of it all.

Did have to do a few things to it like new heater box to intake gasket...thank god for remflex! New intake/exhaust gasket while at it and new rad and heater hoses. P.o. already did new tie rod ends and shocks when I got it. Left to do is new master cylinder as the lid won't stop weeping. power steering pump needs some seals. We also did front crank seal and timing gears just because. And I went through all the wiring connectors with a file and die electric grease. But it's easily a good driver. I also did a points driven t.f.i module with a high output coil. Great upgrade.

Here's my 69 dart wss it has most all the options PS, PB AC dealer install 8 track and hub caps all the lighting options was a dealer special order delivered to Valley Dodge by the regional Chrysler manger in Nov of 68 and my 61 lancer that I just got started after sitting 25 years
enjoy
Larry

My Slant 6 after the new Hotchkis TVS Kit/1.5 Sport Shocks and alignment done. 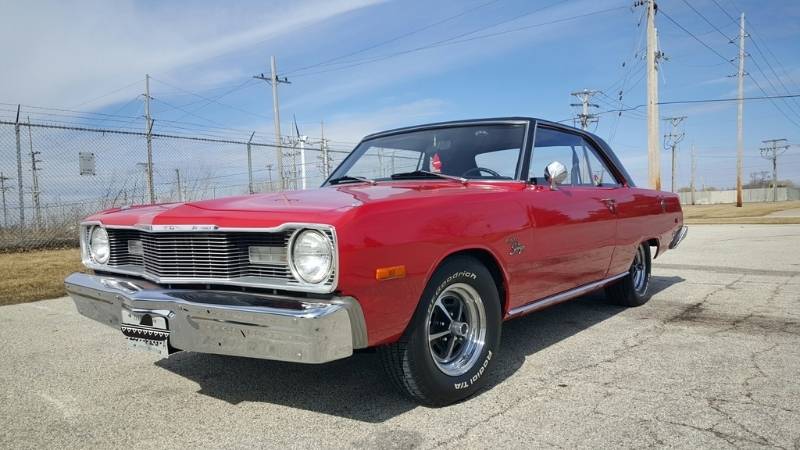 Looks great with those Magnum 500's!
B

after a rub down

Needs a lot of work but she deserves it.

Heres my 1973 Plymouth Duster 6 cylinder auto. It has a fold down back seat and a newly upholstered front seat. The interior is in very good shape the body is in decent shape. The engine and transmission run great. The six cylinder has a 2 Barrel. I love driving her, she is a great cruiser but I got another car too .. (sshh.. its a b-body, 72 satellite).... I cant drive them at the same time.

Picking up my 1976 Dart Lite (Lizzie) from my Dad's house where I had it stored when I transitioned to Kennesaw, GA. She needs the front end rebuilt, but I have most of the parts already. Just needing the manual steering rebuilt and want to upgrade the torsion bars to get it all done. The Dart Lite Logo is hard to see on the fender as its been fading off over the last few years.

It's been a while since I've posted here! Just took this over the weekend at my other job: 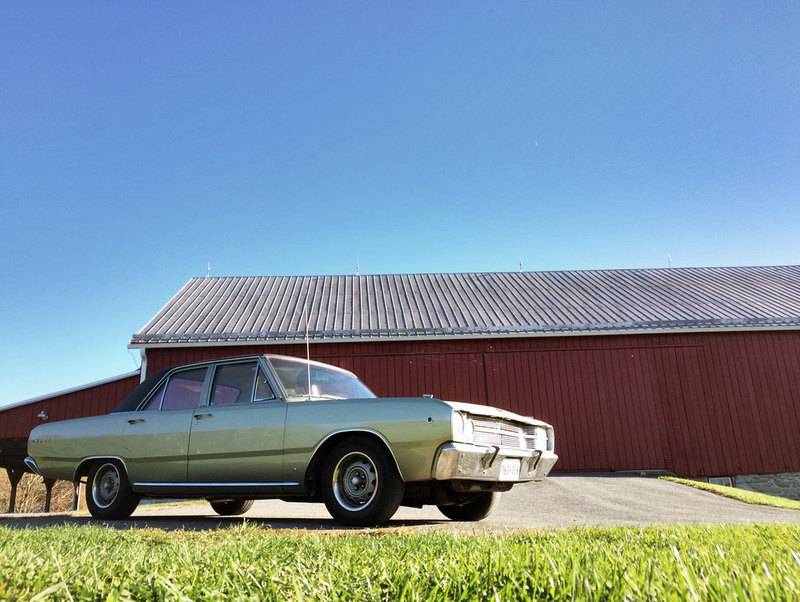 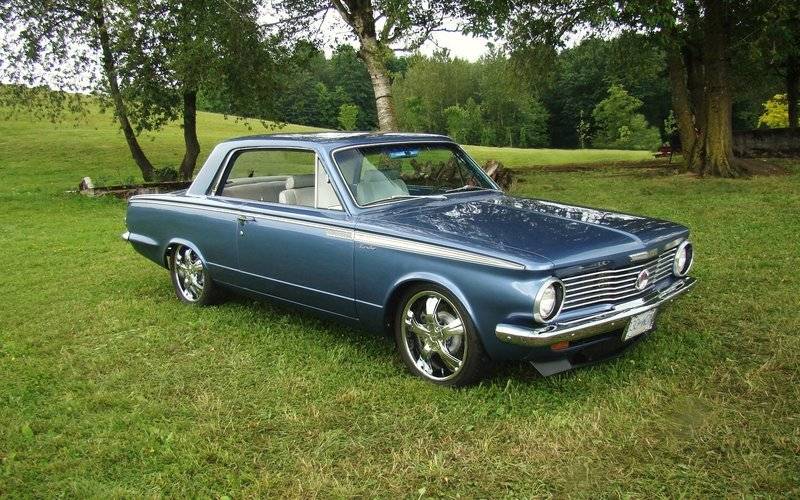 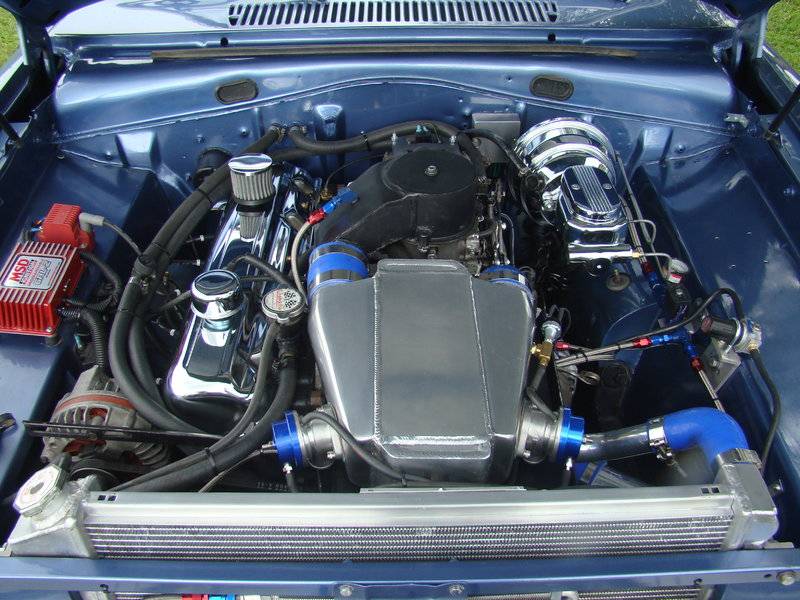 Boost said:
Here is my 65 Valiant!

Nice ride how do you have the air hooked up 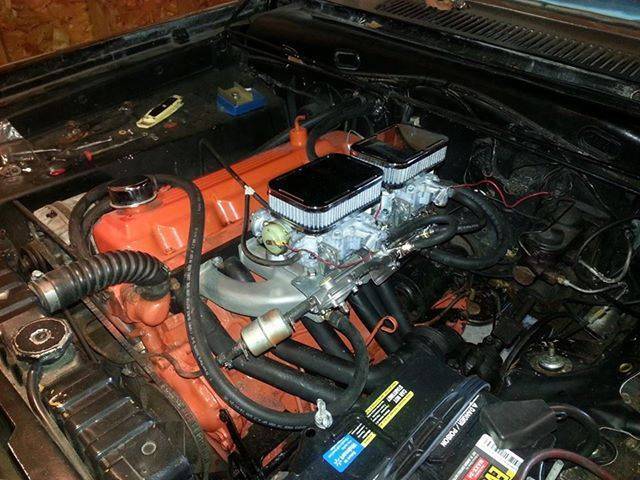 whefner said:
Nice ride how do you have the air hooked up

Looks cool. Lots of carburetion! This view shows the hook up a little better 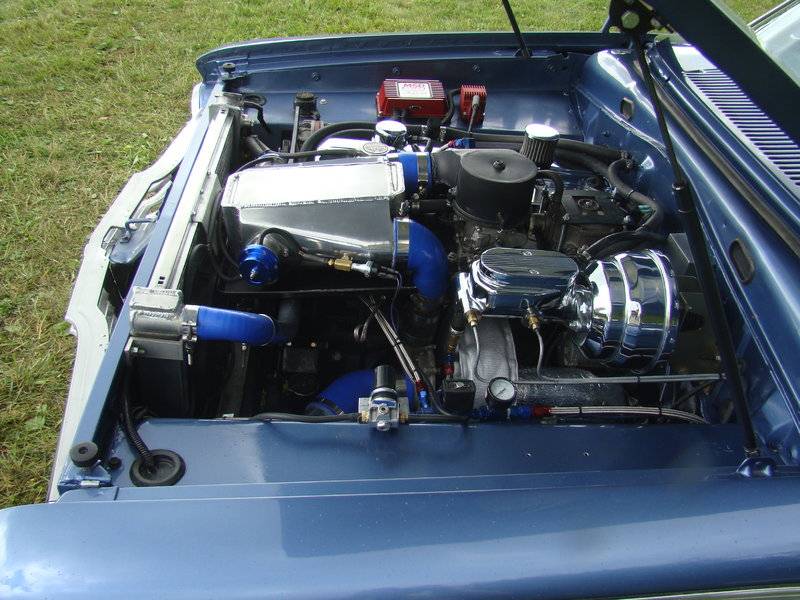 Just went through all the pages in this thread and I have to say WOW,.a lot of very nice cars! It's really nice to see all these cars still running, looking good and on the road.

Here's mine. 66 Valiant Signet that I picked up in October 2016. Very solid car that runs and drives great. I plan on doing a lot to it when the spring comes here in New Jersey. Few more months away,.but I can't wait. 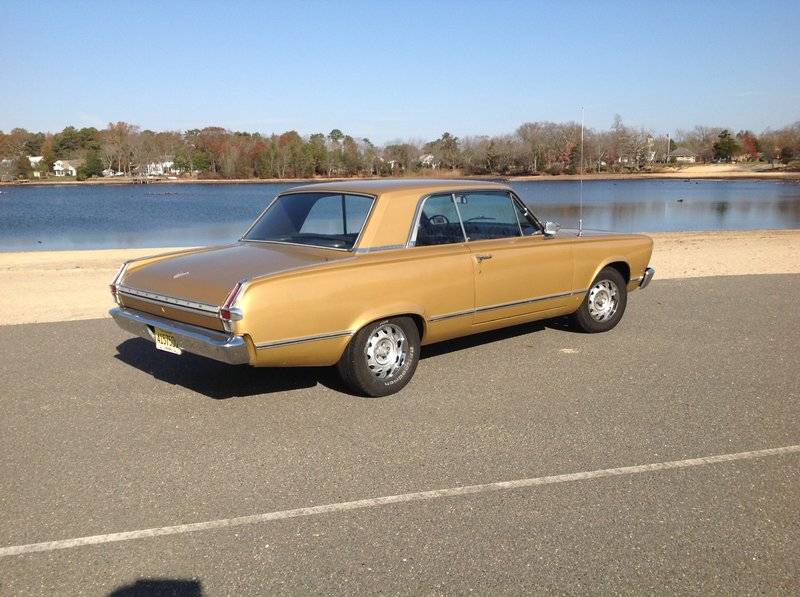 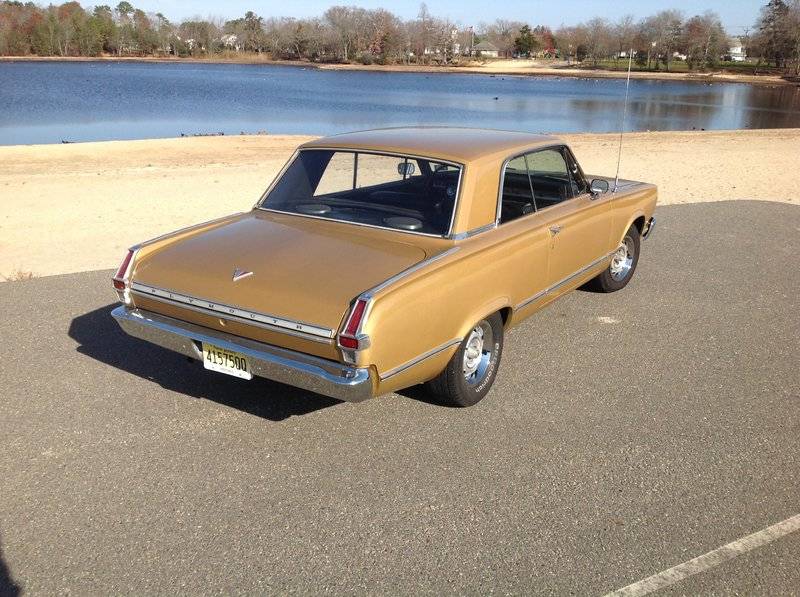 Just picked this honey up last night for $500 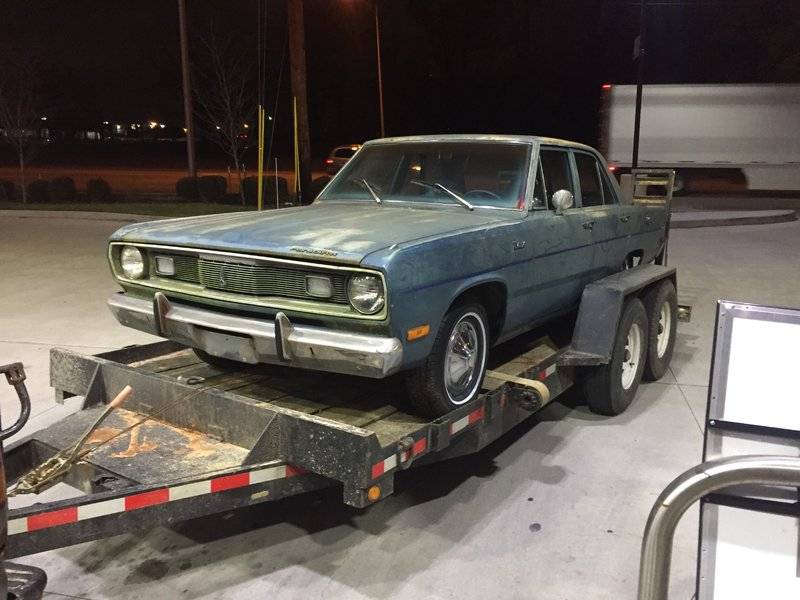 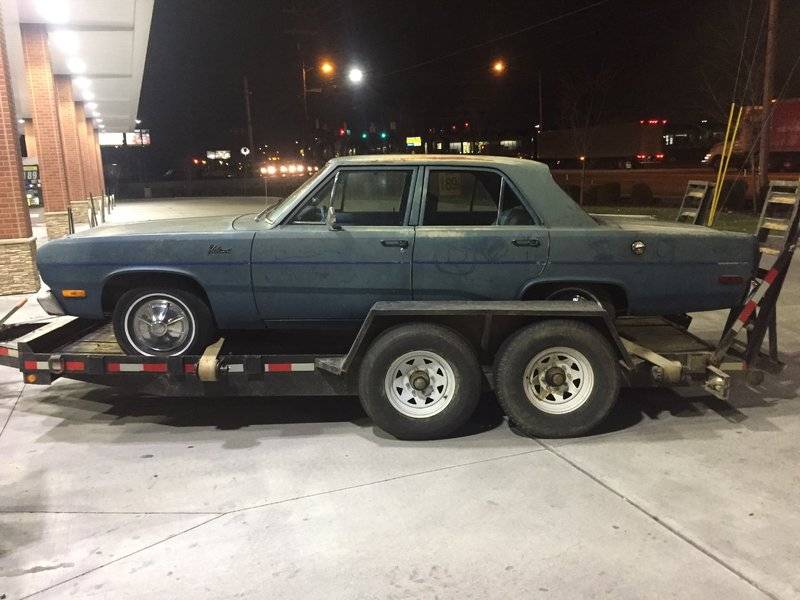 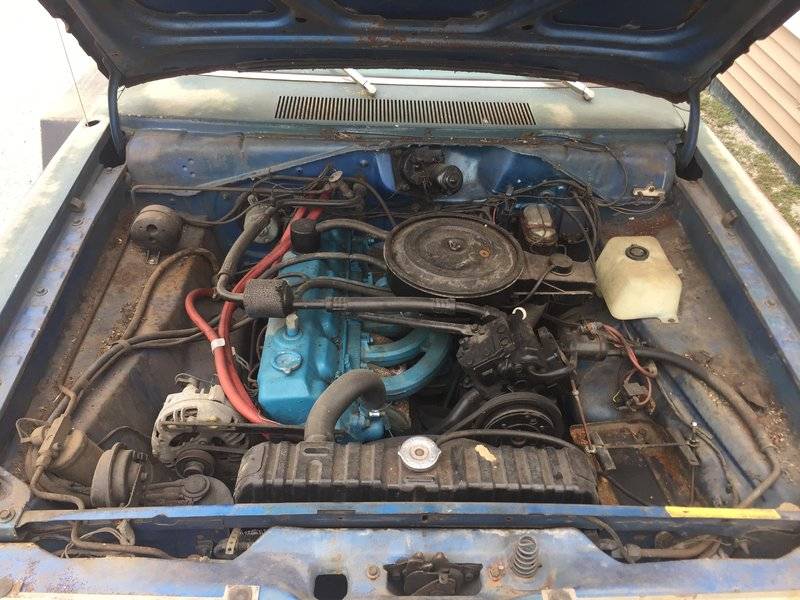 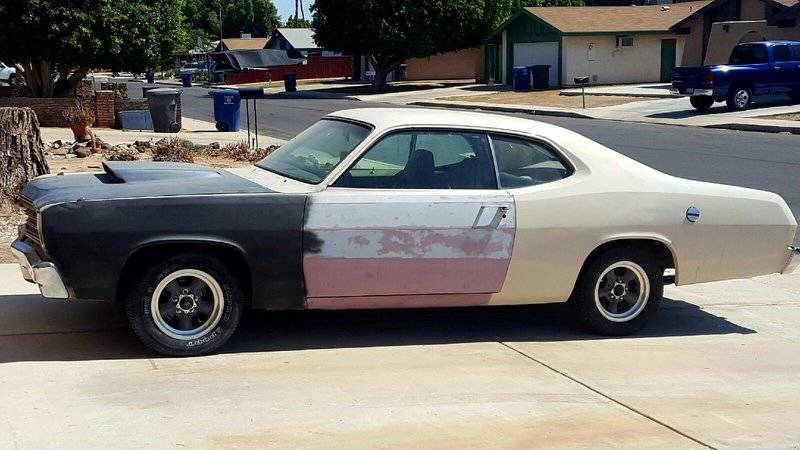 Well, I can show my slant-6, but it's in a 70 Dodge Challenger. So I'm kinda stuck, if I show the engine I show the car and if I show the car I show the engine. I believe you said show us your slant-6 A body's. The engine is a 77 SL6 that I bought from the Dodge dealership that I bought the car from in 1997. Now a Super-Six, BBD Carter, open element air-cleaner, 14x3, K&N, Mopar elect. Ign. Orange ECU, accel coil, s/s flex fan,Hooker 3into1 headers, real dual exhaust w/ H pipe.chrome tips. And a heck of a lot of chrome on engine. Where to go from here?

Show it! I had a 70 Challenger with a factory slant in it. It was a real rust bucket so it got parted out.
S

65 Dartman, hi, yes there are 3 pics under FABO welcome wagon click on "Hi all from SoCal" tell me what you think.

Thanks Dartman, 43 years and counting 562k miles on the clock, drove as a d/d from 1973 to 2005, about 42 miles a day. The miles are on the body and not mechanicals. Things do wear out. She still looks like the day I drove it away from the Dodge dealership. Thanks again, Al
You must log in or register to reply here.

Have you disconnected your OSAC system?