Get a U.S. General from harbor freight I gave 2 of them and a roller cart. They’ve been better than I coulda imagined. Dustin

The Husky boxes are nice. My wife told me to go get new tool boxes last Christmas and I got these at Home Depot. Heavy duty with nice roller bearing soft close drawers and power strips with USB for charging tools and phones. The upright also came with and LED strip light for inside the lid. 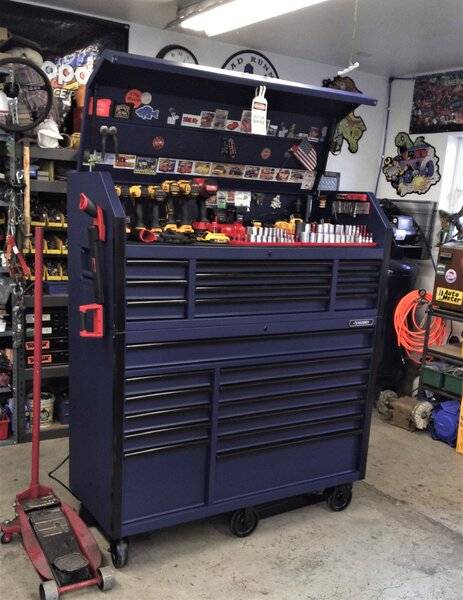 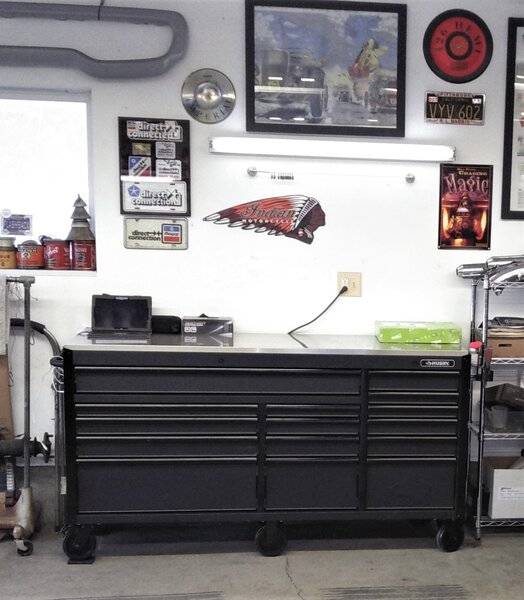 I have the 34" full bank service cart from HF. My co-worker has a snap on service cart. Side by side, I can't see a $1000 difference. Same handle, corner protectors, hood opens the same. Just a different name. As a matter of fact, Snap On sued HF over copying one of their floor jack and lost! Appears the same factory makes both floor jacks.
J

I recently (last year) bought the 44" top and bottom from HF. I still need to organize after building my new garage, but it is a nice set of boxes. I'm not worried about a power strip in the box as I have a 12' workbench that will be on the other side of the new garage and there will be outlets over there. Nothing I charge gets left plugged in after Rhino's fire a few years ago.

my5thmopar said:
My older craftsman is worn out. I would like to get up to about 5ft box. Probably too many tools. I’m going to repurpose it if I can fix the slides. I’ve looked at Husky, Kobalt, Craftsman and HF. I’m not going to buy an expensive one, I’m not utilizing one daily. What should be looking for other than drawer capacities and the total box weight? All the ones I’ve looked at seem very similar and might even be made by the same folks. I did like that the Craftsman was at least assembled in USA. What ya think ? Craig
Click to expand...

Every time I look on FB Marketplace or Craigslist people are selling them cheap. You may want to take a look.

Jim Lusk said:
I recently (last year) bought the 44" top and bottom from HF. I still need to organize after building my new garage, but it is a nice set of boxes. I'm not worried about a power strip in the box as I have a 12' workbench that will be on the other side of the new garage and there will be outlets over there. Nothing I charge gets left plugged in after Rhino's fire a few years ago.
Click to expand...

The new 44" is deeper than the old one. I found that out the hard way. Had an older bottom box and bought a new top last year...Had to buy a new bottom and sell the old one. Still got about what I paid for it...

I bought the US General 26x22 with the top chest. It just seemed to have the drawer sizes similar to my old Craftsman. I like the depth and the drawers pull out all the way. Seems to be built pretty good. The lock is a little funky on the bottom bottom box but, I’ve never even locked my Craftsman. I got $80 off because it had the dent already placed for me. I think it will work fine for my needs. Thanks for all the suggestions. Craig
V

Check marketplace and craigslist for a used snap on Mac or matco box. The only "big 3" tool truck box I ever had issue with was a cheaper line Mac. .and on the subject of boxes taking off on their own and rolling over I had it happen to me once as well.
Back in the 80s and early 90s one of Craftsman's first ball bearing slide equipped boxes were sold as a "PRO SET", and they were black. Biggest box seats sold at the time. And I worked at a Sears auto center when I first got it. I was the only one in the shop to "not" have a red toolbox.
That was my first "real" toolbox. It was ok at first but before long the drawer layout no longer worked for me lots of too little drawers.
But when I first got that box I cut a hole above the top drawer and mounted a car radio in it, put a 12v power converter in the bottom drawer and made boxes to hang 6x9s off the side, and drilled a hole in the side of the top box for a car antenna.
When I moved from Sears auto center to the dodge dealer, I was working a couple of bays over from my own, and I started hearing what sounded like someone rolling a floor jack across the floor. I looked up just in time to see my toolbox roll down the center of the shop behind me and a wheel dropped into a drain and down it went.
I doubt that it would happen next matter the brand now a days but I actually got sears to warranty that bottom box, I got a new one out of the deal. I then traded it in a year later (around Y2K) for the matco one I still have today.
For an at home box, I have a snap on top and bottom that I got from a local auction company,
According to the numbers on back it was built I 1987.
When I got it the drawer slides wouldn't, I took all the drawers out and unbolted the slides, soaked them in my safety kleen tank, blew them dry, sprayed them with white lithium and reinstalled them. About a year later I had a problem with a couple of the slides. I called snap on (I didn't have a rep at the time) and they sent me all new ones for the bottom box. I've had that box 5-6 years now and the slides on the bottom drawer of the top box came apart a few months ago, I gotta move the crap that has built up under and around it so that I can roll it away from the wall, get the numbers off of it (which is on the back side) and get new slides for the top chest..... Nice thing about it is that if I were to sell that box I could get what I paid for it back, today. No it isn't for sale. I ain't dead yet.
Last edited: Sunday at 8:24 AM
V

I don't want anything HF if at all possible just because of principle.
Though back when I worked industrial maintenance in the early 2000s several of my coworkers at the steel mill had went and got boxes from there.
Working at an American steel mill no way I was buying HF. I rarely go in there, and usually when I do I come out as empty handed as I was when I went in.

I am very impressed with the Harbor Freight US General. Unfortunately I missed the sale and paid full price, but I needed a box and I was not going to wait. I was done waiting for a sale. Here’s the 72” I put a butcher block on top, not shown. 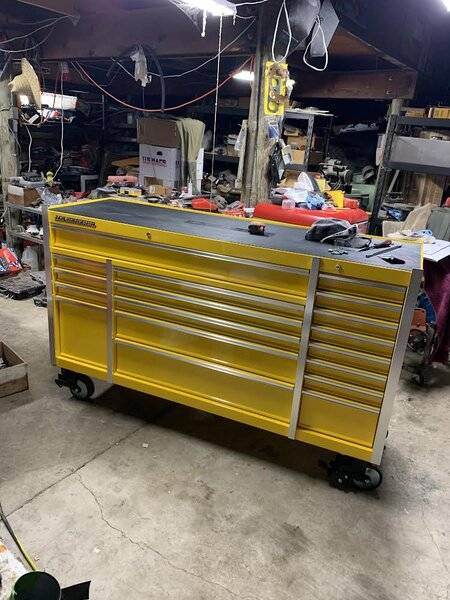 I understand. I retired from a union job. I rarely go to HF and in the big box store, I'll buy anything but, China if possible. I'll buy used or made in USA when possible. I looked around for used. Even though the Craftsman is assembled in USA, I thought it was poorer quality. I would have bought a higher quality box, but, it was simply out of my budget. Craig

I am also thinking about a replacement box for myself. I have a SnapOn box that has to be nearly 50 yrs old. Top box is great, but a fee of the lower drawer slides are about done. Those HF boxes look very nice and will probably get one of them for me.
You must log in or register to reply here.
Share:
Reddit Pinterest Tumblr WhatsApp Email Share Link