Good work. Your numbers are quite a bit different than mine, which are shown in the picture of my calibration box. This is like due to your 2 gallon offset.

Mike69cuda said:
Your numbers are quite a bit different than mine, which are shown in the picture of my calibration box. This is like due to your 2 gallon offset.
Click to expand...

I think the difference in numbers is due to the junk they are selling as a replacement part. The empty point I am using is certainly a part of it as that would move all the other points up, but the full mark is off as well which can only be a result of the sender. It is possible that if I dropped the tank and took a look at where the float sat when the tank was full, that bending the arm could adjust some or all of that difference out, but I'm not going to go through the effort. My gut says it isn't an issue with the float travel but instead with the shoddy part I got from the manufacturer.

I will say, if I end of ever replacing this one with something similar I will probably take some measurements before I put it in to see if there is something that could be done to make it better.

In the end, I plan to drop the whole setup though. A couple of years ago a friend helped me modify a tank to use a gen5 Camaro pump and basket for an EFI swap. When I get to that point, I will probably just use the GM sending unit and this Fuel Bridge to keep my stock gauge.

Not two different fills, just two different readings. I got concerned later in the process that the fuel could be sloshing and cause the reading to be off, so I started taking a reading right after I did a fill and then just before I did the next fill. This gave it time to calm down while I refilled the 1 gallon gas can. I did get slightly different readings at points, but the one at 12 gallons had way more skew than any other point did and was way off for what it should have been. Not sure what is going on there. I should add that this was with a cheap HF multimeter so there is always the possibility that my tools are the problem as well.

Now that I think about it, it does seem like the gauge would drop really fast at one point and then come back up. If so, it would kind of match the readings and indicate that the sending unit has some kind of flaw at that point.

I agree on the senders being crap. That seems to be a common theme in most Chinesium parts we buy now. My gauge works a lot better that it did without the meter match, so at least it is functional.

Here is a chart I borrowed from another thread that compares the aftermarket sender to an OEM. This is the chart I used to build my calibration box. 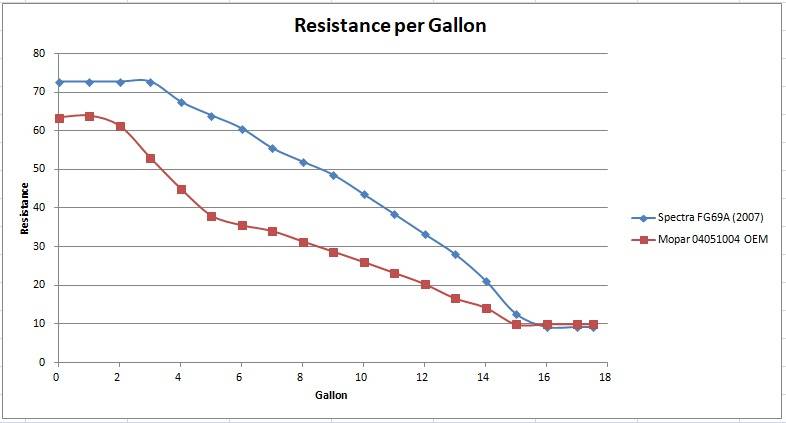 So I gotta ask - is anybody old-school on this board? These gauges are 'adjustable' so this can be done manually. But it's a real PIA because the adjustment is very finicky. I've got mine close, where the pointer is just at the bottom of the Empty line and I have about 4 gallons in the tank. At least it's predictable!

Has anybody installed one of these? Any feedback?
The ebay seller says it's manufactured by Dolphin and it's printed on the unit, but I don't see it on Dolphin's website. Makes me wonder whether the seller got ahold of a batch of failed product and is liquidating them somehow.
You must log in or register to reply here.
Share:
Reddit Pinterest Tumblr WhatsApp Email Share Link